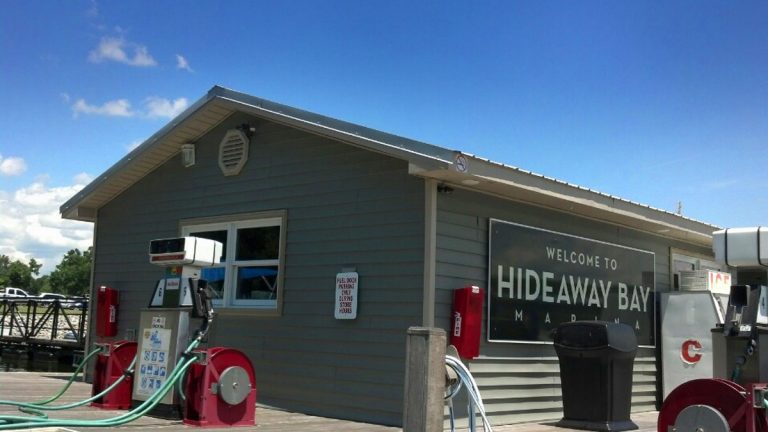 Located about an hour north of Atlanta, Georgia, Hideaway Bay Marina is situated on Lake Sidney Lainer’s Flowery Branch Bay. Operating on the most visited Corps of Engineers Lake in the country, the Hideaway Bay Marina covers 37 acres containing more than 500 wet slips, 150 dry slips, multiple buildings and a lot of infrastructure.


The Need: Expand Network Connectivity Across the Property and Find an Alternative to a Costly, Fiber
Infrastructure
After recently undergoing a major renovation to the property, Hideaway Bay Marina was left without network connectivity between the various buildings and structures on the sprawling property. “We had nothing except fiber lines in one facility,” explained Captain Michael Duling, regional manager of Hideaway Bay Marina. “During the renovations, they forgot to put in the cabling. We knew that we wanted to install a Wi-Fi solution due to the distances involved because installing cabling after the fact would have been cost-prohibitive and would have done too much damage to the facility.”

In addition to providing a fast, reliable connection to the company network and the Internet for employees located throughout the 37-acre property, Duling explained that they wanted to add wireless Internet access as an amenity that would allow their customers to connect via laptops, smartphones and tablets both on-shore and on the water surrounding the marina.

The Solution: EnGenius Business-Class Wireless Bridges
To find the ideal solution for this challenging deployment, Duling turned to Harold Hicks, cooperate account
manager at Tiger Direct. Realizing that a robust wireless network infrastructure would be the most cost-effective way to provide network access to the various buildings and structures on the marina’s property, Hicks confidently recommended the EnGenius ENH500 and ENH210EXT outdoor wireless access points/bridges.

While Hicks explained that recommending an affordable wireless solution for the marina was important, it was equally important to identify a solution that delivered performance and range to support video streaming and provide wireless access to devices from all areas of the property. Hicks was comfortable recommending
EnGenius and even sent Duling a few units to try out prior to the purchase. “I have other business customers that use EnGenius products for indoor wireless networks, but this is the first outdoor deployment I’ve seen of this magnitude.”

The Results: Reliable, Long-Range Wireless Network
Access in a Complicated Environment According to Duling, installation of the EnGenius wireless bridges went smoothly. “Even an idiot could install this stuff,” Duling stated. “Our IT guy handled the programming, but once he figured it out, the system was quick and simple to install.”

Duling explained that in addition to providing fast, reliable wireless network connectivity for devices throughout the marina, the EnGenius wireless network is also being used to transmit secure data and stream video from multiple security video cameras around the property.

Response from the customers that now have free wireless access to the Internet has been very positive, ccording to Duling. “We have a lot of cruisers and this is their lake home for the weekend. We allow them to have free Internet access and they really enjoy having it.” Duling explained that he is amazed at the range the EnGenius bridges deliver, particularly given the amount of steel, copper and fiberglass structures that they are
operating within.

Duling agreed that while data speeds and long-range are important characteristics of the wireless network, so is
reliability. “The system is working very well,” Duling explained. “Actually, I’ve had no issues at all with the EnGenius products. Everything has been performing flawlessly.”