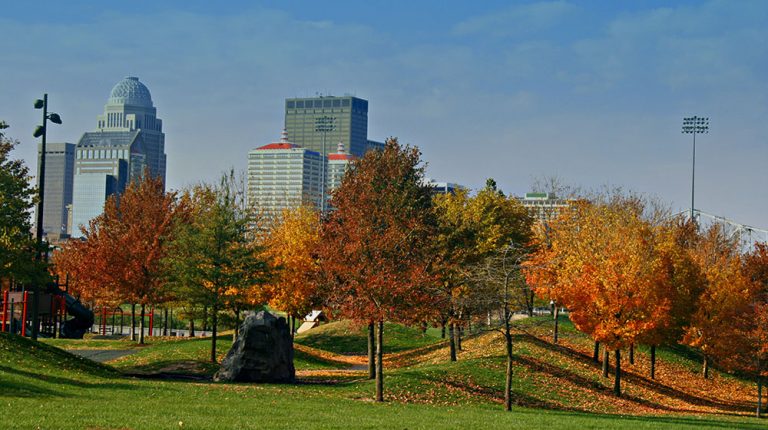 City leaders needed to move quickly to increase security and help reduce safety concerns in the park in advance of the city’s Thunder Over Louisville air show and fireworks display scheduled for April 12, 2014.

The Need: A Reliable, Long-Range Wireless Infrastructure to Support IP Surveillance Network
According to Louisville Mayor Greg Fischer’s web-based newsroom, the city took quick action and the Mayor ordered the installation
of security cameras in Waterfront Park and on the Big Four Bridge. Deploying high-definition IP surveillance cameras throughout the park would require each camera to be connected to a high-speed Internet connection.

“We were tasked with installing 28 cameras in the 85-acre park in less than two weeks time due to the upcoming major event which would have over 600,000 attendees,” explained Chris Seidt, Network Supervisor at Louisville Metro Government.

“The recent mob violence occurred in the same location where Thunder Over Louisville is held so this network of IP surveillance cameras would be critical in increasing security and reassuring the public that the park is safe.”

Not only was Seidt faced with the challenge of deploying a largescale network of high-definition surveillance cameras in a very short period of time, but placing and providing network access to each camera would prove to be a challenge. “While we did install fiber between buildings within the park, many of the actual camera locations are away from the fiber runs,” Seidt said. “We needed a reliable, high-speed solution to connect the cameras back to where we had network connectivity.”

According to Seidt, he immediately knew what vendor he would look to for the wireless networking infrastructure. “We found EnGenius online about a year ago, and installed a set of the ENH500s for the Belle of Louisville, a 100 year old sternwheeler steamboat that is managed by the Louisville Metro Government,” he stated. “Those devices worked very well.”

Housed in a rugged IP68-rated waterproof enclosure, the ENH700EXT delivers speeds up to 300 Mbps on both its 2.4 GHz and 5 GHz frequency bands. The PoE-capable ENH500 features an IP55 waterproof housing and provides speeds up to 300 Mbps on the 5 GHz band to distances up to a mile. The
combination of high transmit power with the ENH700EXT’s four external high-gain omni-directional antennas and the ENH500’s
internal high-gain directional antenna deliver long range and reliable connectivity over large areas.

With the cameras installed throughout the park, network connectivity was enabled quickly and easily using the EnGenius wireless access points and bridges. “The ENH700s are installed on the buildings with the fiber and switches, and the ENH500s are mounted with the cameras and are pointed back to the ENH700s,” explained Seidt. “The EnGenius devices were simple to configure, were easy to mount and install, and provide ample bandwidth for the high-definition cameras we’re deploying.”

According to Seidt, thanks to the easy installation and configuration of the EnGenius products, Waterfront Park’s new video surveillance solution was installed on schedule and is working well. Being able to connect the individual cameras to the network provided additional benefits beyond the ability to monitor activity throughout the park. “We are able to monitor the devices via SNMP, so we can be proactive for our partner agency in troubleshooting issues if they arise.”

Seidt added that deploying the long-range, high-performance EnGenius products for this project opened their eyes to other usage scenarios throughout the city. “The EnGenius products have made us take a second look at how we connect buildings and devices moving forward.”