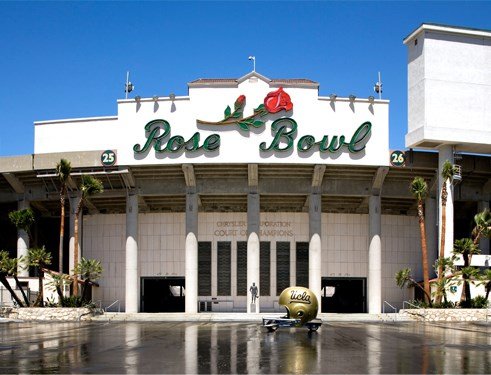 Rose Bowl Stadium has approximately 77 rows of seats with a seating capacity of more than 90,000. The stadium includes a 79,156 square foot turfed area and measures 880 feet from north to south rims and 695 feet from east to west rims. The fence around the Rose Bowl Stadium is one mile in circumference.

The Need: To Provide Reliable Wireless LAN Connectivity for Staff and Media
According to Jess Waiters, technology consultant for Rose Bowl Stadium, the stadium pavilion was undergoing a substantial renovation and it had been decided that the wired network infrastructure in the new pavilion would be standardized on equipment from a top tier manufacturer. However, Waiters explained that at that time they were planning out the network, they did not identify specifically which brand of access points would be used for the wireless network deployment. What they did know for certain is that they needed to have a reliable, high performance wireless network to support the applications used by the staff and members of the media.

“We had a meeting with other venues and found that we’re all experiencing the same issues with wireless,” explained Waiters.
“When you’re operating in a densely populated venue like this, using cellular networks becomes very difficult. Everyone is trying to move to Wi-Fi, but you can’t really do that unless you have a lot of money.”

Identifying a wireless solution that would deliver a combination of reliable Wi-Fi connectivity; fast data speeds throughout the large, RF-saturated stadium; and affordable price points presented a seemingly daunting challenge to Waiters and his team.

The Solution: EnGenius Long-Range Outdoor WirelessAccess Points
Waiters was introduced to the EnGenius family of long-range, outdoor wireless access points by award-winning sports photographer, Richard Mackson, who had been using EnGenius products for years in various venues around the world.

Mackson proved the capabilities of the EnGenius products by mounting an EnGenius ENH500 5 GHz outdoor client bridge to a pole on the south side of the stadium. “He was able to light up the entire field with that single access point,” Waiters explained. In addition to the performance of the access point, Waiters stated that he was impressed with the design of the products. “The product looks bulletproof and can handle any kind of weather,” he said. “And the price was certainly right.”

Based upon his initial tests of ENH500, Waiters has also tested and deployed other EnGenius outdoor access points including the ENH202, ENH700EXT, and ENS500EXT. “What we saw when we were testing the products was amazing,” Waiters stated. “They had long range, they were powerful and they were work horses, so we were really impressed by them.”

The Results: Long-Range and Fast Data Speeds in a Challenging Environment
“Initially we deployed the access points for use only by the media,” Waiters explained. “But due to the performance and attractive price points, we’ve been able to deploy the access points at various locations within and around the stadium to provide wireless network for the media, staff and our security team.”

Mackson expressed his astonishment at the performance of the EnGenius access points while shooting photos at a recent college football game held at Rose Bowl Stadium. Standing at the north end of the football field and looking back towards the EnGenius access point mounted in the stands at the south side of the stadium, he noted the strong signal level he was receiving which was enabling him to wirelessly send his photos in realtime, and at high-speeds, to this publication over the Internet. “I’m standing over 125 yards away from the access point in this RF-saturated stadium and I’m still receiving a strong signal and fast speeds. This shouldn’t work, but it does!”